Ty Garner can count his remaining days at Nebraska Wesleyan on two hands.

It would take several hands to count the number of experiences he’s accumulated in his 3 ½ years here including starting a new campus organization, volunteering for local, national and international service projects, performing in the choir, serving as co-editor of the campus newspaper, completing internships, and designing his own academic major.

“I wouldn’t change anything,” said the Broomfield, Colo. native. “I feel like NWU has given me a good base to jump off with.” 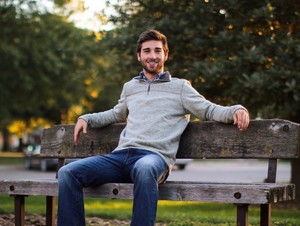 It’s not uncommon for some new students to have little idea about what they want to study in college. Others come already knowing their exact career path. And some think they know until a new class or experience piques their interest and turns them down a new academic path.

Nebraska Wesleyan University junior Addison Miller moved to college from Colorado Springs, Colo., with plans to play football and follow in his father’s footsteps by studying psychology and business.

But early in his first year Miller suffered a major injury that ended his football career.