Voting is an enormous responsibility at the age of 18. Imagine being granted the right at 16.

In 2015, Scotland lowered its voting age to 16-years-old — the youngest voters across the globe.

“Sixteen and 17-year-olds are not too far from our age,” said Nebraska Wesleyan University senior political science major Evan Mathers.

Mathers and fellow political science major Ryan Klute were intrigued. What impact do 16-year-old voters have on elections? Does it evoke controversy? How do older generations feel about the change in voting age and its possible impact?

The students from Lincoln, Neb., wanted to know more, and thanks to a Student-Faculty Collaborative Research Grant, the two joined political science professor Kelly Clancy in Scotland for two weeks where they turned their inquiries into research.

"I wanted them to have a lot of freedom in the project but I wanted to be accessible to help them process their experiences, troubleshoot problems, and provide feedback,” said Clancy. “I wanted them to actually do each piece of the process, because there's such satisfaction in completing a project that you own."

Klute and Mathers put together draft after draft of their research proposal, and once approved, began prepping for their research trip, which included learning more about Scotland’s history and scheduling interviews with Scottish politicians, students, and activists.

More recently, voters decided the U.K.'s stance in the European Union (EU). The election resulted in the United Kingdom's departure from the EU, though Scotland wanted to stay. Once more, young voters participated and the results were closely divided.

While in Scotland, Klute and Mathers asked Scottish citizens about their role in the elections, the personal impact they experienced from the new voting age, and the anticipated effects of voting on youth.

The NWU students uncovered a divide among the voting party in Scotland, perhaps explaining the close outcome of the earlier elections. The new voters said they felt close to their home country but don't feel influenced by the rest of the U.K. Despite their closeness with Scotland, their national identity did not appear to influence their vote. In contrast, older generations said they felt tied to the other countries of the U.K. and thus their expansive national identity had large influence on the decision to remain in the U.K.

Opposing mindsets would presumably create disagreements between Scottish generations. However Klute and Mathers observed that the newfound opportunity to vote brought youth closer to their parents.

"Kids learn about the referendum and their voting responsibility at school and then they go home and tell their parents," said Mathers. "They're informants for their parents and vice versa."

"Politics is more like a social movement or party there than a serious issue," added Klute, comparing Scottish and American views on voting.

The responsibility to vote is seemingly much more exciting and celebrated overseas, said Mathers and Klute, though they admit it may have more to do with the election subject than the actual responsibility.

Even so, researching firsthand the voting rights and their impact outside of the U.S. is an unbelievable opportunity, they said.

"This experience really gave me an opportunity to do things I wouldn't have gotten to do otherwise," said Klute. "The confidence and maturity I gained in Scotland is really something special."

"This is one of the best experiences Nebraska Wesleyan students have," Clancy said. "This program allows students to be the primary investigators. It's not only a great experience for graduate school, but also for students to understand how knowledge gets created."

END_OF_DOCUMENT_TOKEN_TO_BE_REPLACED 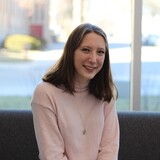 Gilman Scholarship Will Take NWU Junior to the Southern Caucasus