Gwennan Plouzek, a sophomore biology and Spanish major, is the fifth NWU student in three years to be selected for the prestigious Fulbright Summer Institute.

Nebraska Wesleyan University sophomore Gwennan Plouzek is one of 60 college students from the United States and the United Kingdom selected to participate in the prestigious Fulbright Summer Institute.

Beginning June 20, Plouzek will spend six weeks at three internationally renowned Welsh universities where she will explore the culture and heritage of Wales while further developing her research, communication and ambassadorial skills.

“My time spent in the country will expose me to a culture far different than that of Lincoln, Nebraska, and act as a reaffirmation for my love of languages,” said Plouzek, a biology and Spanish major from Lincoln.

Her ties to Wales began long before she discovered it herself.

“My parents gave me a Welsh name because it was a country so dear to their hearts,” said Plouzek whose father was stationed in the UK. “The opportunity to discover this country that has been part of my life for years is one that I have only dreamt of— meeting the people, hearing the language and music, and witnessing the history that the country brings to life.”

Each year the US-UK Fulbright Commission selects 60 undergraduate students to participate in academic and culture programs at leading U.S. and UK institutions. The Commission selects participants through a rigorous application and interview process. Students are selected based on academic excellence, extracurricular and community activities, ambassadorial skills, and plans to give back to their home country upon their return.

Plouzek is among five Nebraska Wesleyan University students who have been selected for the Fulbright Summer Institute since 2012.

An awakening sound: bagpipes give life to a walking NWU tradition

Americans and the Holocaust traveling exhibition coming to Nebraska Wesleyan

END_OF_DOCUMENT_TOKEN_TO_BE_REPLACED 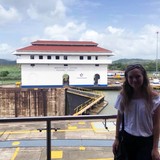