One of the highlights of homecoming at NWU is the annual Legends and Legacies banquet. That’s where NWU pays special tribute to outstanding alumni for life and career accomplishments.

The Duncans are incredibly committed to NWU. Todd serves on the Board of Governors, while Connie serves on the campaign cabinet behind the university’s efforts to build a new science facility. As CEO of Duncan Aviation, Todd has helped provide private flights for President Fred Ohles as he travels the country advocating for Nebraska Wesleyan. The Duncans are also generous in their financial support of NWU.

Munkres’ career in mathematics is truly outstanding. He is a retired professor at the Massachusetts Institute of Technology. He authored America’s most widely used textbook on topology. He is also the namesake of the Munkres assignment algorithm, a combinatorial optimization algorithm with strong applications in the airline, mass transit and delivery industries. His algorithm helps these industries create efficient networks to move people and goods.

NWU and the liberal arts taught Linder to be multifaceted. Her career reflects that quality. The cytotechnologist with Heartland Pathology, Inc. is a scientist, artist, entrepreneur and author. It was her skill as a writer that set her apart as a scientist. “Sadly, writing is not a common strength for most scientists,” she said. She credits her reputation in cytotechnology in large part to her ability to express complex ideas simply. The same skill helps her in business. Her latest book, The Women of Berkshire Hathaway, explores the leadership qualities of several Berkshire CEOs.

Work may take Richardson, an Omaha native, to Arizona, but she’s remained very connected to campus. The certified public accountant serves on the President’s Board of Advisors; she’s active in alumni events; she’s organized a Lend-a-Hand event in Omaha and offered advice on the development of NWU’s MBA program.

Kabourek teaches more than English—and coaches more than running—to her students at Lincoln East. She teaches and coaches tenacity, commitment, drive and positivity—the same qualities that have served her through bouts with cancer. Her mantra remains: “I can. I will.” “I can, I will … continue teaching students how to overcome obstacles with grace, humor and perseverance,” she said. Her six-year battle with cancer ended on September 16, 2015.

Rev. Hanneman has a tremendous record of service in warzones. He was a medic in the Vietnam War and a missionary in the Congo. He served with WorldVision in Mozambique, Sudan and Bosnia during their civil wars. He called his service and ministry “just part of a basic attempt to do good in the world.

END_OF_DOCUMENT_TOKEN_TO_BE_REPLACED 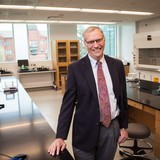 Six Outstanding Alumni to be Honored as Legends & Legacies Winners