Thanks to a gift from the Pearle Francis Finigan Foundation, a professional LED lighting system has been installed in O'Donnell Auditorium to enhance the experience for both the performers and the audience. The project is part of Bold Designs: The Campaign for Nebraska Wesleyan University. Among the campaign's priorities is creating premier learning spaces like O'Donnell Auditorium.

Liana Sandin ('81) is president of the Pearle Francis Finigan Foundation and studied music at Nebraska Wesleyan. "A new lighting system will help the music students, of course," said Sandin. "But O'Donnell Auditorium is also a major venue for the entire student body, community groups and performing groups. It needs to be up to date."

Liana Sandin (’81) fondly remembers the many hours she spent on the O’Donnell Auditorium stage.

“I was in a lot of things,” Sandin recalled of her involvement in choirs, operas and even serving as an usher at other events hosted in the auditorium. “O’Donnell means performance to me.”

Sandin wants performers like her to savor those experiences and memories too. As president of the Pearle Francis Finigan Foundation — a local foundation dedicated to supporting the arts — Sandin recognized the facility’s need for new lighting and knew it was the kind of opportunity her foundation could support.

“Nobody ever questions whether you need to update labs or update facilities, but for the arts it’s more like, ‘you can make do’,” she said.

Making do is largely what Nebraska Wesleyan’s Department of Music has had to do. O’Donnell Auditorium’s lighting system was no longer supported by the manufacturer and faculty and staff were relying on obsolete parts. Failure of those parts presented serious challenges to the school’s largest recital hall, which hosts over 40 events each year.

With the help of a gift from the Pearle Francis Finigan Foundation, the new LED lighting system was installed this spring, providing greater flexibility for performances and educational opportunities for students.

Students performing in the spring opera, “Die Fledermaus,” were among the first to enjoy the spotlight shed by the new lighting system.

“This takes it to another level,” said NWU opera director Dawn Krogh. “To be able to use lights to enhance the emotion or drama behind something I think is pretty exciting and will be utilized a lot more in the future.”

“Now the lighting can be used to set the tone of specific scenes,” she said.

In addition to improving the O’Donnell Auditorium atmosphere, the LED lighting system will eventually become a training ground for students interested in the technological side of performing arts.

And creating multifaceted opportunities for the arts is exactly what Sandin had in mind.

“We need to not make it to the top ourselves and then pull the ladder out behind us,” said Sandin. “We need to make sure others are coming, and it’s not that we will have less because they have more. It’s that we will all have a better life because there are more people who are educated in the arts. You need to be culturally educated.”

To honor Sandin's many contributions to the arts at NWU, it was announced at the spring opera that future opera performances will be named the Liana K. Sandin Opera Series. 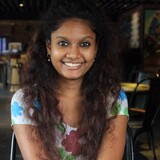