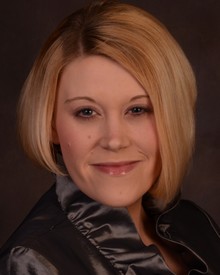 Dr. Talea CMS Bloch is a soprano from Lincoln, Nebraska. She has her Doctorate of Musical Arts degree in vocal performance from the University of Nebraska in 2014. Her dissertation “The Best Show in Town: A Study of Friend, Nebraska and Fairfield, Nebraska Opera Houses” details the rich history of live performance in small town Nebraska. She holds a B.A. from Nebraska Wesleyan University in Music, Theater Education, and History Education. After teaching social studies at Millard Central Middle School, Bloch returned to Lincoln to complete her M.M. in vocal performance at UNL. Bloch studies under the direction of Donna Harler Smith.
Bloch currently teaches voice at Nebraska Wesleyan University, Concordia University and Grace University. As a performer, Bloch has many credits to her name. Her most recent roles include “Lady Billows” in Albert Herring, “Alexandra” in O Pioneers!, “Countess” in Le Nozze di Figaro, “Margaret” in Light in the Piazza, “Mother” in Amahl and the Night Visitors, “Rosalinda” in Die Fledermaus, “Katisha” in The Mikado, and “Ruth” in Pirates of Penzance. Bloch has been a member of Opera Omaha's Chorus for 7 seasons, performing in over 15 productions. She has also been a featured soloist in Verdi’s Requiem, Bach’s B minor Mass, and Handel’s Messiah, performing with both the Omaha Symphony and Lincoln’s Symphony Orchestra.
Bloch lives in Lincoln, Nebraska with her husband, Jeremy. She is a member of NATS (National Association of Teachers of Singing), CMS (College Music Society), and an alumni of Mu Phi Epsilon. She serves on the Friends of Opera Board and the Metropolitan Opera National Council Auditions-Nebraska District Board as the Publicity Chair.