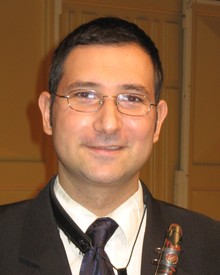 Professor Pance Zaev began teaching at Nebraska Wesleyan University in the fall of 2008. He served as a graduate teaching assistant for five years at the University of Nebraska-Lincoln and studied with Dr. Diane Barger. He graduated from UNL with his Master degree in the spring of 2004 and completed a Doctor of Musical Arts at UNL in 2015. He is originally from Strumica, Macedonia where he began his music education. He studied clarinet at the Music and Ballet High School Center, in the capital of Macedonia. He completed his Bachelor of Music degree in clarinet performance at the University of the Pacific (UOP) in California. During his career, he has had the opportunity to hold a number of professional roles in addition to his teaching career. These roles have include; a private music instructor, chamber musician, solo and ensemble performer in clarinet and saxophone, clarinet performer at Lincoln’s Symphony Orchestra, and with the Lincoln Municipal Band. He is a classical performer with the chamber groups Marshall Trio, and at Nebraska Wesleyan University with The Huntington Trio. He also plays and teaches a variety of different styles such as blues, jazz, Americana, pop, and klezmer music. Last summer his jazz group Swing Fever performed at the Jazz in June festival in which he had a chance to play New Orleans jazz style on the clarinet and saxophone.