Just knock on my door, or email me for a Zoom link. I welcome an email or phone call to arrange another time! 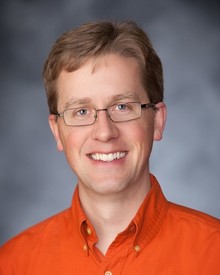 I fell in love with Physics in high school, and pursued it in college, where I also discovered philosophy. After agonizing about whether to continue my studies in physics or philosophy after graduation, physics won out, and I chose to specialize in astrophysics.

In my graduate work, I developed astronomical instruments, and used them to study the births and deaths of stars. I have since worked on detector systems for the high-power Diocles laser system the University of Nebraska-Lincoln, and I currently study the surfaces and atmospheres of small bodies in the Solar System using ultraviolet light observed by the Hubble Space Telescope. Since 2007, I have contributed to NASA's New Horizons mission to Pluto (and beyond!) and the European Space Agency's Rosetta mission that orbited a comet.

I joined the Physics faculty at Nebraska Wesleyan University in 2010.

Ph.D., Astrophysical and Planetary Sciences, University of Colorado at Boulder

M.S., Astrophysical and Planetary Sciences, University of Colorado at Boulder

General Physics I
MWF 10am - noon

Small bodies in the Solar System: Moons, comets, asteroids. Properties of their surfaces and thin atmospheres/outgassing.