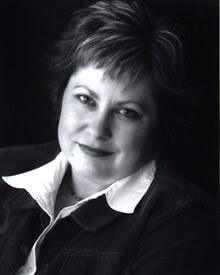 Soprano Jana Holzmeier has been praised by reviewers as a “delightful performer,” possessing “celestial” sound, “impeccable phrasing and a keen sense of character.”  The Austin American-Statesman described her as a performer who could “stir up a few goosebumps with her vocal power and expression; just when you thought she had reached her limit, she found something in reserve.”

Dr. Holzmeier is a Professor of Music and Chair of the Department of Music at Nebraska Wesleyan University in Lincoln, NE.  She has a Doctor of Musical Arts in Vocal Music Performance from The University of Texas at Austin.  She teaches Applied Voice, Singer's Diction, Vocal Literature, Musical Theatre, and Vocal Pedagogy.  Dr. Holzmeier is an active performer in the community and region.  She is certified to teach Levels I & II Somatic Voicework℠/The LoVetri Method.

On the operatic stage, Ms. Holzmeier has appeared as Pamina in Die Zauberflöte, Laurie in The Tender Land, the Female Chorus in The Rape of Lucretia, Ciesca and Nella in Gianni Schicchi, Antonia in The Tales of Hoffmann, Mary in Randall Thompson’s The Nativity, Nedda in Pagliacci, and Ruth in The Pirates of Penzance.