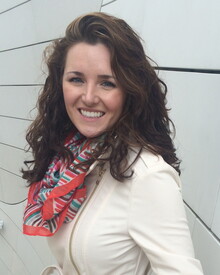 Bailey comes to Nebraska Wesleyan as a Ph.D. candidate in Art History and Archaeology at Columbia University. She specializes in ancient Greek art, but her interests go beyond antiquity. Bailey is interested in the material and visual culture of religion; the agency of artworks and iconoclasm; portraiture and personal identity; and the intersection of public art and collective identities.

Her dissertation, "Making an Appearance: Presenting Hellenistic Kings in Portraits and in Person," re-examines a group of fragmentary, poorly understood Hellenistic royal portrait statues featuring divinizing, conspicuous, and theatrical forms, iconographies, and placements. The dissertation addresses the resonances between such features and the marvelous bodily adornments, choreographed movements, calculated performances, and physical stagings of kings' real bodies in royal rituals and spectacles, ultimately revealing the performative functions of emphatic artifice in royal appearances.

Bailey’s research is supported by the Getty Foundation, the Sakıp Sabancı Center for Turkish Studies, the Starr Foundation, the Rosenthall Foundation, the Canellopoulos Family, and Columbia's Department of Art History and Archaeology. She served as a docent at the Onassis Cultural Center New York for two exhibitions, “Gods and Mortals at Olympus: Ancient Dion, City of Zeus” and “A World of Emotions: Ancient Greece, 700 BC – 200 AD.” She has excavated with Columbia University’s Onchestos Excavation Project and the University of Nebraska's Antiochia ad Cragum Research Project. She has published in the Metropolitan Museum Journal (2020) and contributed to Mother Jones.