On Sunday, May 5, William "Doc" Wyman will conduct his final home concert. Wyman is retiring in May after 44 years at NWU. His tenure has included over 100 national choir tours, 10 international tours and four performances at Carnegie Hall. He has taught nearly 2,000 students while at NWU.

The dynamic lyrics to Leonard Bernstein’s “Make Our Garden Grow” convey to the listener that life if nonsensical and unpredictable … but we experience it together.

William “Doc” Wyman can point to many life experiences over his 44 years at Nebraska Wesleyan University. So, it’s only appropriate that he has chosen “Make Our Garden Grow” as the last piece he’ll conduct for the University Choir.

“With this song, I wanted to leave with the feeling that there’s still things to be done,” he said.

Wyman’s final concert with the University Choir is Sunday, May 5. He’ll retire in the following days.

Wyman’s impact on NWU has been profound.

After finishing his collegiate career and teaching in Pennsylvania for six years, Wyman applied to schools in the Midwest and soon learned of an opening in NWU’s Department of Music.

Wyman recalls his direct flight to Lincoln where he arrived late in the evening.  The department chair picked him up from the airport and brought him to campus. Because of the time, campus buildings were closed.

They eventually made their way to a voice professor’s home where other music faculty joined them. Ultimately, it was the faculty’s attitude that won Wyman over.

“There was something very special about the desire of those people at the time,” Wyman recalled. “They said they would do what was required to help me build a substantial program.”

A conversation with a friend and Ohio State University choir director convinced Wyman to stay, citing Wyman’s opportunities including multiple performances with the Lincoln Symphony

“It made me realize how good I had it,” said Wyman. “You’re not going to go to many places where you can do that.”

“I had administrative support and the president helped me put on a huge concert. I thought, where could I go that this kind of support would be readily available to me?”

Nebraska Wesleyan has provided countless memories for Wyman. It’s where he met his wife, Tami.  It’s where his daughter, Riley, studied and performed in the choir.

Wyman is quick to admit every choir tour was memorable but the international tour to Romania brings profound memories. The University Choir was the first American choir to perform in Romanian conservatories.

“I remember the vivid picture of these Romanian audiences lining up with my singers to get an autograph and we couldn’t get off the stage,” Wyman recalled. “The people were so hungry for interaction. They couldn’t publicize the concert times because there would be a riot.”

At one point an elderly gentleman who didn’t have anything to autograph pulled back his shirt and asked the students to sign his undershirt.

Romania was a culture shock for Wyman and his students.  With bugged rooms, secret police, and oxen-driven carts, the students couldn’t comprehend the conditions.

Wyman recalled one point in the trip when secret police began beating some Romanian youth who were trying to talk to the choir members.  Seeing how upset and confused his students were, Wyman gathered them to talk about what they had witnessed.

“You have a choice,” Wyman told them. “You have to realize that this is the way things happen here or you can realize that we can make a little difference through our music.”

Wyman is regarded for building the choir’s visibility and reputation.

In his second year at NWU, Wyman performed a concert with composer Randall Thompson.  In Wyman’s third year, he hosted composer Aaron Copland, followed by conductor Robert Shaw during his fourth year.

“We were touring extensively and those were exciting years,” Wyman said.

Perhaps his most popular tradition is the performance of Malcolm Sargent’s “Silent Night,” which has been sung by each of his choirs on the annual winter choir tour.

“The piece gives ownership to every alum who has ever sung it so it draws them together,” he said. “It’s been a great piece for bringing the concert home. Audiences always respond to it.”

Wyman’s final home concert on May 5 will includes two pieces by Randall Thompson.

“He was the first heavy hitter I brought here,” Wyman said. “It’s kind of a bookend. We started with Thompson, we’re ending with Thompson.”

The concert will also include music from Bernstein’s operetta, Candide, ending with “Make Our Garden Grow.” The following week, Wyman and his choir will board a plane for Spain, his last international  tour.

As for retirement plans, Wyman looks forward to a light schedule.

“The one thing we won’t be doing is traveling,” noting all of the travel opportunities he has had at NWU. “I think we’re ready to pause for a while and just have nothing to do and no schedule to follow.”

On Sunday, Wyman anticipates a combination of sadness and relief.

“There’s only so much I can do. I would rather go out while I think that I’m still effective to my students than have someone suggest that it’s time.”

The University Choir concert begins at 3 p.m. in O’Donnell Auditorium, located inside the Rogers Center for Fine Arts at 50thStreet and Huntington Ave. It is free and open to the public.

An awakening sound: bagpipes give life to a walking NWU tradition 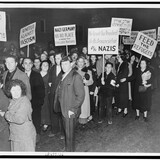 Americans and the Holocaust traveling exhibition coming to Nebraska Wesleyan