Eight seniors have been selected for the 2019 homecoming court. The homecoming king and queen will be crowned on Friday, October 4 and will reign over weekend activities.

Eight Nebraska Wesleyan University seniors have been named to the 2019 Homecoming Court.

Students were nominated by campus organizations and selected based on interviews.

Members of the homecoming court include:

Kelsey Jaeschke, an athletic training major from Kenesaw, Neb. She is a member of the Athletic Training Student Association, Health and Human Performance Club and Phi Epsilon Kappa Honorary Society. She played for the NWU Women’s Basketball Team and has served as a peer assistant in the residence halls. As an athletic training student, she has assisted the football, volleyball, men’s basketball, indoor/outdoor track & field, cross country, baseball and softball teams.

Christine Olson, a biology major from Omaha, Neb. She is a member of Alpha Gamma Delta Sorority, Greenhouse Project, Tri-Beta Biology Honorary, Sigma Tau Delta English Honorary, Order of Omega Greek Honorary, and has served as a Prairie Wolves Welcome leader and as a student ambassador for the Admissions Office.

Morgan Shipley, a biology major from Lincoln, Neb. She is a member of Delta Zeta Sorority, Student Athlete Advisory Committee, Pre-Health Club, Tri-Beta Biology Honorary, Psi Chi Honor Society, Cardinal Key Honor Society, Psych Club, NWU Catholic and Beekeeping Club. She is a member of the Nebraska Wesleyan Softball Team, and has served as a Prairie Wolves Welcome leader and as a student ambassador for the Admissions Office. She was also selected to participate in the Nebraska INBRE Scholar Program for biomedical research.

Anthony Baker, an exercise science and psychology major from Falls City, Neb. He is a member of Phi Kappa Tau Fraternity, Health and Human Performance Club, Psychology Club and I-PAL Program. He is a member of the NWU Cross Country Team and NWU Track and Field Team, and has served as a first-generation peer mentor, Prairie Wolves Welcome leader, Student Conduct Board and Student Affairs Senate.

Jacob Barrett, a biology and religion and philosophy major from Colorado Springs, Colo. He serves as vice president of the student body, and is a member of the Wesleyan Entertainment Board, Global Service Learning, Homecoming Committee, Forum Committee and co-founder of Bridge, NWU’s interfaith student organization. He serves as a peer assistant in the residence halls and is an Archway Seminar co-instructor.

James “Jimmy” Lowe, an English major from Omaha, Neb. He is a member of University Choir, serves as a peer assistant in the residence halls, and is a co-coordinator for the Gender Advocacy Place. He has served on the Student Affairs Senate and has been a member of Pride Alliance, Action Council on Diversity and Inclusion, Diversity Leadership Team, Jazz Choir, Chamber Choir and has been a tutor for the Cooper Center for Academic Achievement. 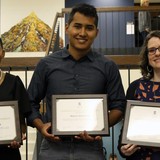