Professor of Music William Wyman stands among the shelves filled with the Norman Luboff Singers Collection that now belongs to NWU.

“Four hundred years of music all encapsulated in compositions and arrangements.”

Luboff, conductor of one of the most popular choral ensembles in the 1950s and 1960s and active until the 1990s, died in 1987. His wife gave his collection to Jackson and Almeda Burkey, a pianist and a singer in his choir. Now the collection belongs to Nebraska Wesleyan University.

“Jackson, Almeda and I have done a number of things collaboratively,” said Wyman. “Jackson asked me if I would like to take custody of it.”

At the time of Luboff’s death, the Burkeys had a professional choral organization in Omaha, but they have since disbanded.

“The collection was just taking up space, and they felt they wanted to have it somewhere that it could be used,” said Wyman.

“I took it as an incredible gift. But then I thought that there was no point in keeping it for me,” Wyman added, “so in turn I gave it in perpetuity to NWU to keep.”

When Wyman uses the word “incredible,” he is not exaggerating. The collection has a range of style periods from English madrigals to late baroque. There are works by more than 30 composers – from Antonio Vivaldi to Franz Joseph Haydn, from Giovanni Pierluigi da Palestrina to Antonin Dvorak– plus Luboff’s own arrangements and compositions.

“Luboff also started a major music publishing company called Walton Music, so everything he recorded with Walton Music is in the collection,” said Wyman. “He was a wonderful composer, conductor, and arranger.”

And a very versatile one.

“He did a lot of things you can consider in a jazz style, but also classic compositions,” said Wyman.

Luboff found a way to introduce a whole array of music that would have remained hidden.

“It was the total package, because he could display excellent choral singing at a professional level through the Luboff Chorale, and then he could make it available through Walton Music, along with promoting music a bit out of the mainstream.”

Luboff was one of the major figures in the creation of the American choral school, together with Robert Shaw and Fred Waring, said Wyman.

The collection will be used in the university’s academic programs. The collection has also prompted waves of excitement among many choral directors.

“We just hosted our annual Honors Festival, and I showed the collection to the high school directors, letting them know to feel free to use it,” explained Wyman.

The Norman Luboff Singers Collection is not the only music library in Nebraska Wesleyan’s Music Department.

“I have another large library of music for men’s choir, women’s choir, cheer choir, jazz choir, children’s choir and the University choir. And then another collection of major works for upper schoolers,” said Wyman. “It includes everything I have ever done in my 40 years here at NWU, so it is a very substantial collection. A lot of my students are in teaching positions all over the country and they are very eager to have access to it and use scores that would not be otherwise retrievable.”

There is no doubt the Luboff collection constitutes the cherry on top of already remarkable collections. An inestimable cherry, said Wyman.

“I really do not know how you could ever put a price on it,” he said.

END_OF_DOCUMENT_TOKEN_TO_BE_REPLACED 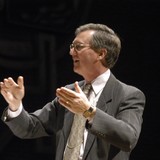