END_OF_DOCUMENT_TOKEN_TO_BE_REPLACED

Sa'javeane Wright was selected as a recipient of a Benjamin A. Gilman International Scholarship to study abroad.

Wright, a business and modern languages-Japanese major, will study Japanese at Nazan University in Nagoya, Japan for the next nine months. She is among nearly 3,000 undergraduate students from across the U.S. selected for the 2022 scholarship. 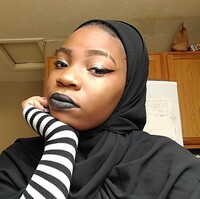 "It means the world to me that I won the Gilman," said Wright. "I didn't expect to receive the scholarship due to its competitiveness, but it has been a tremendous help."

A requirement of the scholarship is that students create a “follow-on service project” that is completed upon the conclusion of their study abroad. For Wright's project, she plans "to go back to my high school to hold a presentation for interested seniors about the Gilman Scholarship. When I was in high school, and study abroad options were offered to me, I believed I wouldn't be able to go. My family just doesn't have that kind of money. I know there are kids who feel the same way, so I want to help by giving them [the awareness]."

She graduated from Westside High School in Omaha.