Ghost hunters from across the country have tried to find evidence of the ghost of Clara Mills.

The ghost stories continue today with possible sightings in Old Main and the Rogers Center for Fine Arts.

The legend of the ghost of Clara Mills started in 1963 on a chilly autumn October morning. It was 8:50 a.m. and Coleen Buterbaugh, a secretary to Dr. Sam Dahl, was searching for a guest lecturer on the building’s first floor. Walking down the corridor, Buterbaugh recalls that she heard only the normal sounds of classes changing and of students in the halls.

As she entered the office suite at the north end of the C.C. White Building, she found that all the windows were open and that the room was empty. After taking about four steps into the room however, Buterbaugh had a strange feeling that she was not alone. She smelled a strong odor of musty, stale air, and noticed that it had grown strangely silent in the hall outside.

Then she saw it.

“I looked up and just for what must have been a few seconds, I saw the figure of a woman standing with her back to me at a cabinet in an inner office. She was reaching up into one of the drawers. I felt the presence of a man sitting at the desk to my left, but as I turned around, there was no one there.”

Gazing out one of the large windows behind the desk, Buterbaugh noted that the scenery seemed to be that of many years ago. There were no streets, Willard Sorority that stands just across the campus was not there. Nothing outside was modern. Buterbaugh was frightened and left the room.

There is still a controversy as to whom or what Buterbaugh saw that morning in the C.C. White Building. She talked later that day with Dr. Dahl about her experience, and he in turn sought out Dr. E. Glenn Callen, Professor of Political Science.

Without revealing the details of his secretary’s experience, Dahl asked Callen if he remembered knowing anyone at NWU who might fit Buterbaugh’s description of the vision. She had described the shadowy figure as being a tall, young slender woman with black hair. She wore a long-sleeved white blouse and an ankle-length skirt. She had not seen the woman’s entire face.

On that day, she was found dead in her office, apparently the victim of a heart attack. Mills is buried in Lincoln’s Wyuka Cemetary.

Since 1963, para-psychologists, psychiatrists and ghost hunters from all over the country have examined the evidence for the ghost of Clara Mills.

The stories continue today including those of possible Clara sightings in Old Main, the Smith-Curtis Administration Building (former site of the C.C. White Building) and the Rogers Center for Fine Arts. 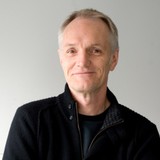