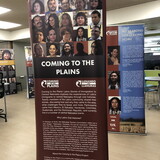 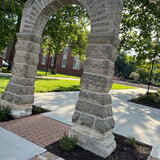 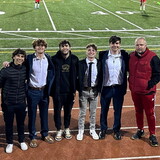 END_OF_DOCUMENT_TOKEN_TO_BE_REPLACED

Senior Melissa Hatch is living out every college student’s dream, to observe the effects of traumatic brain injury on chronic alcoholic rats. The Lincoln-born psychology major’s interest in neuroscience started in high school and developed through the “Zombie Brain” Archway Seminar where she conducted a research project on prosopagnosia, a disorder characterized by the inability to recognize faces of familiar people. She gained hands-on learning as a CNA in Madonna Rehabilitation Hospital’s Traumatic Brain Injury (TBI) unit, where she worked individually with patients. After observing countless patients who had suffered brain injuries where alcohol consumption played a factor, Melissa wanted to learn more. She learned that many researchers were asking whether alcohol consumption before an injury played a part. “I was thinking about that at work, but I had no idea how to do it and no idea if it would change anything. When I started looking into research, I saw there was a lot to learn and wanted to conduct my own research.” 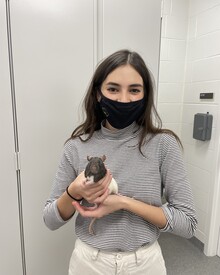 Now Melissa will contribute to the growing body of knowledge surrounding alcohol consumption and TBI. Melissa is in the planning and approval stage of a study she hopes to launch in January. Her research will begin when a shipment of 24 young adult male rats arrives at Nebraska Wesleyan. Young male adult rats were chosen because young adult human males statistically experience high levels of TBI and alcohol consumption. The rats will be housed in the specialized facilities in the newly built Acklie Hall of Science. Acklie Hall includes an elevator that enables the safe transport of the rats to and from the specialized rooms where testing will take place. After they arrive, the rats will enjoy a week of habitualization where they have free access to food and water.

“Without this facility, I can quite simply say that this research would not be possible.”

After the exposure period, the rats in Group One and Group Two will be induced with TBI. Melissa will anaesthetize the rats so they do not feel anything while undergoing the procedure. To induce TBI, Melissa will use the noninvasive Maryland Model, which includes a 500-gram ball rolling down a ramp and connecting with a piston.

Melissa will repeat the neurobehavioral function tests 24 and 48 hours after the procedure to assess neurodysfunction. Melissa hypothesizes that dysfunction will be present at both times but won’t worsen at 48 hours. “A study that looked at acute alcohol intoxication took data at 6 and 24 hours after TBI. They didn’t have any elevated levels of dysfunction at 24 hours, so I wanted to do a later time point to see if its prolonged.”

Observing the cytokines and neuro-inflammation solidifies her study’s relevance to real-life outcomes, “the goal of my research is to raise awareness of the effects that chronic alcohol exposure can pose in regard to TBI specifically. Additionally, results from my study can stimulate future research focusing on therapies that may reduce neuroinflammation and therefore reduce risk of secondary injury.”

Melissa has found enthusiastic support from the best faculty around. Melissa has built a close relationship with psychology professor Dr. Elizabeth Freeman, who has provided inspiration and support throughout her study and academic career.

Before Dr. Freeman became an integral component of NWU’s psychology department, she was conducting her post-doctoral research at the University of Nebraska–Lincoln where she developed a maternal care model to circumvent side effects to offspring when substance addiction is involved. Now at NWU, Dr. Freeman wears many hats. She teaches classes in the psychology department, advises the NWU Psych Club and supervises student researchers, one of whom is conducting a study on mice genetics, a group that is exploring human research, and a student researching Alzheimer’s.

Melissa and Dr. Freeman also work together in a lab group that models quarantine during the COVID-19 pandemic. The group hopes to uncover the different levels of alcohol consumption between enriched and isolated groups and gender. This setting has prepared Melissa to conduct her own individual research, which is one of Dr. Freeman’s goals for the group. “With my lab they’re independent researchers and I supervise them as their faculty mentor. They were trained by me and continue to be trained on different skills: small animal surgery skills, how to mix the constituents of alcohol and neurochemistry to isolate certain proteins. It is my goal that they become independent with my supervision.”

Dr. Freeman hopes her students understand that their research will change the world. Medicine development relies on humane animal testing. Studies conducted on rats, with which humans share a lot of DNA, are a critical step in moving research on human disorders and addiction up the chain to develop into clinical trials. Dr. Freeman ensures students are ready to make an impact in that field.

Another crucial part of Dr. Freeman’s impact at NWU is her direction of the Xtreme Rat Challenge, where students apply different learning principles to teach rats a variety of skills including rope climbing and long jumping. Each student is assigned a rat at the beginning of the semester. The student’s first item of business is to familiarize themselves with their rat and the standard magazine and lever training in the operant chamber. Through magazine training, the rats will learn to associate sound with the presentation of food. The sound then becomes a positive reinforcer and serves the students throughout the rest of their training. At the end of the semester, the students coach their rats through the Xtreme Rat Challenge. 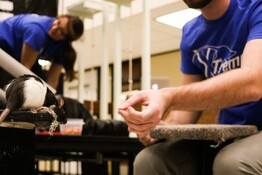 Dr. Freeman hopes her students gain a greater understanding of the world by learning and applying these principles. “If you speed, you get a ticket; but if you study, you get a good grade. These are also those reinforcing effects.”

Melissa and her fellow students in the psychology department have the opportunity to make field-changing discoveries every day. The customized facilities in Acklie Hall of Science make those opportunities possible. Melissa uses the learning and perception lab on the second floor to collaborate with other students, and the students in the Xtreme Rat Challenge conduct most of their training in the same lab. The animal science lab in the basement of Acklie Hall includes a large open space to conduct research, an area for small animal surgery, housing for the animals, a woodshop where Melissa will construct apparatuses for her study and advanced software to simulate locomotive activity in an open field and other behavioral tests. 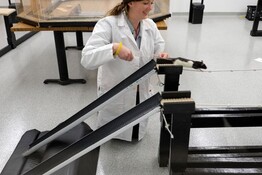 Dr. Freeman knows that the specialized facilities in Acklie Hall help so many possibilities materialize. The labs in Olin Hall of Science did not include a quiet area to effectively train or house the rats. Today, students have space on two separate floors, advanced technology and an elevator to transport their animals without frightening other students. The completion of Acklie Hall in January 2019 came with an almost $30 million price tag funded entirely through gifts from generous donors and friends, including $1.8 million in contributions from Doctors for Science—a group of physicians and scholars committed to the advancement of the sciences at Nebraska Wesleyan. Acklie Hall and other specialized facilities take the NWU experience to the next level: “I think this building, not only for our department but for every department that’s in here campus wide, has opened up the ability to do this type of research. Without this facility, I can quite simply say that this research would not be possible.”

Nebraska Wesleyan’s strategic plan includes a vision for more specialized facilities like the behavioral labs in Acklie Hall. Facilities of excellence will help our buildings and grounds match our academic and co-curricular excellence while providing opportunities to increase student and faculty impact on ground-breaking research in their fields.