Leave a Place Better than You Found It
Published
Thursday, December 3, 2020

Nebraska Wesleyan hopes students leave the university better than they found it: that each student leaves better equipped to face the world than when they arrived, and that the university is better for having welcomed that individual into the campus community.

While Nebraska Wesleyan’s influence on an individual student may be easy to identify, student impact on the university is more difficult to pinpoint. Institutions are slow to change, and four years may not be enough time for a student to sow their influence and harvest its fruits. But over time, change happens.

When asked how well Nebraska Wesleyan supports students, Madeline Almond (’21) replied, “I think NWU is in a good place in listening to students, but we still need to make sure we include everyone’s voices.

When we say we want change on campus, it’s because we love this school and want it to be better for the next round of students.”

Madeline doesn’t always feel heard when she expresses the challenges she faces as a disabled student, but when she arrived at Nebraska Wesleyan, she was pleasantly surprised to find a much bigger fear assuaged. Before Madeline transferred to NWU last fall, she and her wife, Sam, decided to be covert about their relationship on campus. Moving to Lincoln from out of state, they were anxious about whether they could be open.

They knew they’d misread Nebraska Wesleyan before they unpacked: “When we got to our apartment, we started to unlock our door to move our things in and our neighbor, who is a trans woman, came out of her apartment. Meeting her was so welcoming and comforting after such an anxious trip, and she is a big reason we’ve felt comfortable at NWU.”

Madeline is now the president of Pride Alliance, an organization that creates a safe space for queer students to be themselves and that responds to the changing needs of LGBTQ+ students on campus. When she first learned about the club at the Involvement Fair, Madeline knew she and Sam could be open on campus.

“Not every Nebraska Wesleyan student has the same experience—some do not feel comfortable being out at home or with friends outside of the group—but Pride Alliance takes in everyone, treats them kindly and helps them feel safe as themselves.”

Pride Alliance hasn’t always been as easy to find. Devon Beezley (’13) struggled to fit in as a non-traditional undergraduate who was married at the time, and he didn’t know about Pride Alliance until he attended a Trans Day of Remembrance event in his first or second year at NWU. “I remember there were ten or fifteen people standing outside Old Main at night, and there was a projector to show the names of trans folks who’d been murdered that year.” Even after meeting others who didn’t quite fit in at Nebraska Wesleyan at the event, Devon didn’t find many friends among other NWU students.

Devon really found his place in the classroom. “Nebraska Wesleyan provided me the opportunity to explore many topics of interest, and I dove deep. I spent essentially an entire year studying ancient Greece, a year studying genocide and a year studying LGBTQ+ and trans experiences. I was an English major my first three years and a sociology major my fourth year, but I took classes in all the humanities because I wanted to understand the human condition. The liberal arts experience expanded my mind, and the faculty could not have been more supportive.”

While exploring his academic interests, Devon also found himself. He was finally diagnosed with dyslexia and learning disabilities, and he found a confidant in Disability Resources Coordinator Sandy McBride. His vision for the life he once wanted ended, and with that his marriage. “Nebraska Wesleyan was a turning point place for me. It was a whirlwind. My whole life fell apart, and I started over.”

Every trans person I met had one thing in common: they hated themselves. And I didn’t hate myself.”

With the support of family, friends, counseling and professors, Devon became himself at Nebraska Wesleyan and followed his newly diagnosed learning disabilities into a career as a disability advocate. When his deep interest in the human condition led him to pursue a career change to nonprofit management, Devon knew who to ask for reference letters in his Master of Social Work applications. “My professors in English and Sociology were supportive during my time as an NWU student. I had no trouble being myself around them. I come back to campus every year (until 2020) to visit, and I knew I could ask Professors Sue Wortmann and Rick Cypert to help me follow the next step in my career.”

Tyler Richard (’06) began his career as an advocate and activist while a student at Nebraska Wesleyan. After joining the Wolf Fund committee to ensure the diversity initiative directed funds toward inclusive programming for LGBTQ+ students, Tyler advocated for permanent programming funding for Plains Pride (now Pride Alliance) and increased campus support for LGBTQ+ students, including staff training and other institutional resources. In addition to these more private supports, Tyler knew NWU also needed public events inclusive of LGBTQ+ voices, including trans voices.

“There have always been trans students at Nebraska Wesleyan.

When I was helping found the organization now known as OutNebraska, I met a trans NWU alum from decades ago. I helped the Forum Committee bring the film Normal and trans speakers to campus for Visions and Ventures when I was a student; I later learned that a fellow student who was not yet out as trans attended the film and discussion.” Tyler’s work helped pave the way for the Trans Day of Remembrance event that helped Devon find himself and his place at NWU.

Tyler, who majored in musical theatre, is now an advocacy professional with the ACLU. “Nebraska Wesleyan was fundamental in me finding my path. The liberal arts experience gave me the flexibility to explore my interests beyond musical theatre, including a semester in Washington, D.C., with the Capitol Hill Internship Program. I worked with the United States Students Association, where I focused on a project that makes college campuses better for LGBTQ+ students and learned about a career in advocacy work.”

At the time, Tyler was working on a center for student involvement campus climate survey to put data behind the anecdotes of the LGBTQ+ student experience. The handful of trans, non-binary and intersex NWU students on campus had serious concerns about their learning environment, and Tyler was attending and leading meetings about how to make campus better for his classmates. “My conversation with Joan was a pivotal moment for me. I continued with my musical theatre degree, but I knew I wanted to become a professional advocate and activist.”

Just as Devon would later throw himself into research of the trans experience through his sociology courses, Tyler used his senior theatre production to continue to explore advocacy and activism. He put on stage real stories of hate and violence toward LGBTQ+ students on NWU’s campus. And Tyler’s courses pulled him deeper into his understanding of gender and sexuality. In Performance of Gender with Professor Jay Chipman and in fulfilling his literature requirement in a class with Professor Gerise Herndon, Tyler was exposed to art not just about trans folks, but by trans folks.

Tyler and Devon both know the impact Nebraska Wesleyan has had on their lives. And Tyler was quick to learn the impact he could have on his alma mater. Shortly after graduating, Tyler ran into a member of the Advancement staff at Walgreen’s and soon began six years of service on the Alumni Executive Council. “It was a good way to stay connected without having financial flexibility. I was—and am—on a nonprofit salary, but I could give young alumni a voice on the Alumni Executive Council.”

Still, Tyler makes a gift to the Archway Fund each year, often during Giving Day each spring. Pre-empting the content of his social media post on Giving Day 2018, Tyler summed up the Nebraska Wesleyan experience for him and so many others. “The unique and often quirky relationships I made at Nebraska Wesleyan have been meaningful to me.

Campus can be homogeneous—and NWU continues to work on that. Still, it is a campus where even those who don’t fit the mold form relationships.”

He encouraged fellow alumni to give back so more students could have the life-changing experience they all had.

Each student’s Nebraska Wesleyan experience shapes the university and future students. Tyler’s advocacy has ensured that Pride Alliance has the resources to support one another and adapt to virtual gatherings this semester. Madeline and her wife’s path to fitting in as married non-traditional undergraduate students was just a bit easier because Devon had found his way before. And Madeline knows she has a role to play in not only supporting fellow students today as the president of Pride Alliance, but also in making the way for future students to belong.

NWU students’ influence on future generations does not end when they leave campus. Alumni never leave the NWU community and many continue to make an impact through service to the university, financial gifts, relationships with professors and lifelong friendships with fellow alumni.

As Tyler so aptly wrote on Giving Day 2018: “A prosecutor, a conservative strategist and an ACLU employee walk into a bar . . . and chat about how awesome their NWU experience was!” 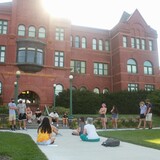 How do we reimagine the NWU experience? Together.