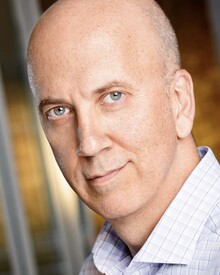 David started his professional acting career as a company member of the Three Rivers Shakespeare Festival in Pittsburgh, PA.  He worked in numerous professional theaters in Pittsburgh and Chicago in the 1990s.  After getting his AFTRA card in Pittsburgh, and SAG card in Chicago, he moved to LA to pursue an on-camera acting career.  David has been cast in over 100 SAG-AFTRA and AEA gigs, from coast to coast, in Mexico City and Buenos Aires.  Some favorite roles have been one of the Black Pearl Pirates in Pirates of the Caribbean: Dead Man’s Chest, Donald Donchick in The West Wing, Malvolio in Twelfth Night for the Three Rivers Shakespeare Festival, Mr. Zero in The Adding Machine for the National Pastime Theatre, Dairy Queen’s commercial “Carry On” and Pepsi’s commercial “Interview”.

David asked Rae Dawn Belt out on a date in 1996 — still the smartest thing he ever did.  They have a delightfully humorous and light-hearted son named Henry.

B.A. in Theater Arts from the University of Akron

M.A. In Theater Arts from the University of Akron

M.F.A. in Acting from the University of Pittsburgh

Acting for the Camera

Voice and Movement I